Are anyone else’s “Suggested Topics” all your own posts?

[name_m]Just[/name_m] wondering if this is something everyone’s seeing.

At the bottom of all topics, there’s a “Suggested Topics” section for other content you might find interesting based on what you’ve been reading.

Mine are always the same selection of my own started topics. 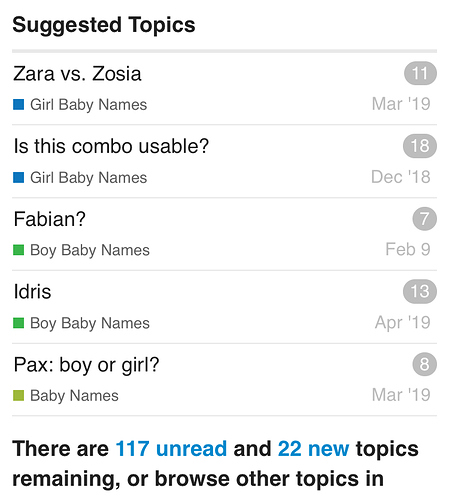 Interested to hear what others are seeing in this section?

Mine don’t appear to be ones authored by me right now, but I have noticed my old threads from when I first created my account (or from even earlier on my old account, which is amusing) popping up in there, especially when I post in Girl [name_u]Baby[/name_u] Names!

[name_f]My[/name_f] 70s/80s name post cropped up for me on my Feedback post (I assume because similar names?) but so did a couple of really old posts containing the same/similar names from my account!

All of my suggested topics are threads I’ve started myself.

Mine aren’t threads I’ve started myself, but they are all threads that I’ve already previously replied to.

Some of them are my own, but they’re mostly other people’s!

Hmm… OK, thanks for the feedback everyone. Maybe I just have very specific taste!

Mine are:
A topic that I didn’t started but looks like started by me
Some topics that I replied before

Yes! I was reading some of my old posts and later they all appeared as suggested topics

Now I’ve opened all the ones I was consistently being suggested, they have cleared and been replaced with others. Some are my own posts from way back when, others are other people’s posts that I’ve participated in.

So it seems that this isn’t a glitch, it’s how the feature works. But it is strange that you seem to keep being presented with the same suggestions until you cave and open them. More logical would surely be to remove suggested topics from that section if a user is consistently not opening them, rather than to keep re-suggeting them

[name_f]My[/name_f] suggested ones are all my own, it’s interesting to see how much my naming style has changed over the last year