What gender is this baby? 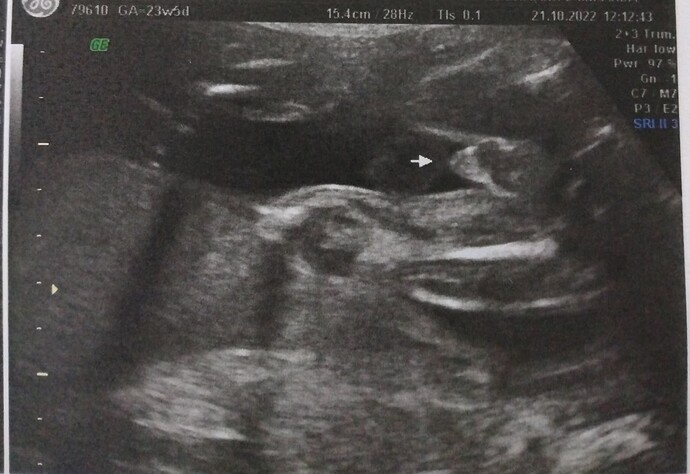 I just had my 24 weeks ultrasound but the doctor wanted to see the gender by looking underneath the baby (which is new to me) what gender do you guys see there? I would prefer seeing it using the standard way

I’m not sure what you mean by “the standard way.” The only way I’ve ever seen a doctor do it is by looking in between their legs like in this picture. And it looks like a boy to me, but if you wanted to know the gender, why didn’t the doctor tell you what they saw?

Here it’s a pic of what I meant by standard way. He said he wasn’t sure and asked for another ultrasound (which will take a while for me) so that’s why I came here to ask you guys. It’s my first pregnancy I am not an expert 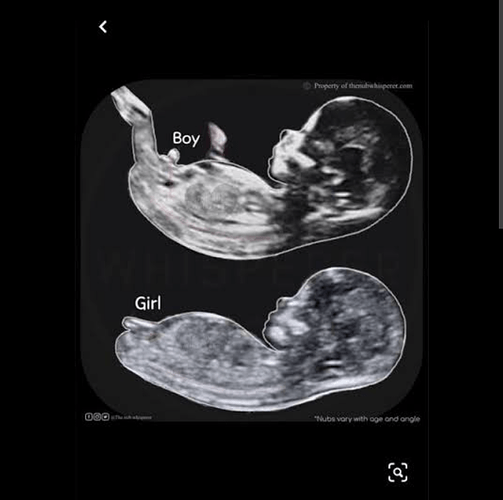 I haven’t ever seen them determine the sex in that standard way! I guess there’s different ways but I’m no expert.

I think the picture shows a boy!

I’ve had two boys and a girl and my guess would be boy!

I think this example you’ve given is for a baby not as far along as 24 weeks. Girls don’t look like that at 24 weeks. That’s like maybe 10-15 weeks.
I believe they call it “nub theory”. At 24 weeks the sex should be pretty obvious unless the cord or something is in the way.

Yeah I’ve never seen a doctor try to determine sex from the side like that because their legs could be in the way and it’s not a straight on view of their genitals. The view from underneath between their legs (like what’s in your picture) is the most common and most accurate way. It definitely looks like a boy to me, but honestly it can be hard to tell. [name_f]Do[/name_f] you have any more ultrasounds planned for this pregnancy? If the doctor was unsure, they might be able to verify in another ultrasound.

That way you showed as a standard way is nub theory and is definitely not the standard way, it’s just a theory and most doctors don’t use it. Especially here in the UK anyway. But it’s nice to theorise and I got my baby right by looking at the nub.

From the original post, that’s definitely a boy. You can see the scrotum which is a big give away that it’s not the cord sticking out next to it.

It looks like a boy to me. I’m not saying I’m absolutely sure because I’m not a doctor, but based on that image your doctor could definitely have made an educated guess. I find it weird that he didn’t.

The example is, as the others have said, the nub theory and is less reliable. I’ve never known any doctor here to use it for that very reason.

Honestly, unless you’re an ultra sound tech id never try to guess from an ultrasound. The umbillical cord or anything else can be in the way and you could get a big surprise if you go off something you think you see, or don’t see for that matter. Not knowing is fun though, you’ll have the rest of their life to know what they are! But that announcement in the delivery room is soooo exciting. Since there is so much fuss surrounding the mother for 9 mos I let my husband have the honor of sharing the big news with everyone what we had. It gave him an important job that day too, in a sense. But of course, do what’s right for you. Congrats!

I’m fairly certain it’s a boy; it doesn’t look like an umbilical cord to me (this shape is a bit more defined it seems), however, I could be wrong!

do not try and guess from the ultrasound, from experience!

We were told our son was a girl for a week because his was tucked to look like the umbilical cord.

This is the “standard” way to check sex - they go with whatever way is most visible/however baby is willing to cooperate. With my son, the second time we checked, he was basically sideways with his legs wide open when they caught it. The first time when they guessed girl, he had been turned with his bum facing so they looked from underneath. It’s however baby is positioned that determines how they find the sex.

do not try and guess from the ultrasound, from experience!

The only way to be sure is a blood test, of course. When my mother was pregnant with my twin brother and me, my parents were told we were both boys throughout the entire pregnancy. It was only when I was born they found out I was a girl.

Ultrasounds are quite difficult to read so you shouldn’t go by what we say unless maybe someone here is an ultrasound tech or an ob/gyn but even they can occasionally make a mistake because the baby wasn’t in a good position for viewing. The docs/techs usually figure out their mistake on the next ultrasound before birth if they’re unsure or get it wrong the first time but not always.
A big reason why US is difficult to read is that what looks like the nub could actually be the umbilical cord or a shadow or something else in the way so your doctor probably just wanted to be sure instead of telling you boy then you go buy a bunch of boy stuff and decorations only to later find out it’s a girl.

The only way to be sure is a blood test

Well in your case, the blood test wouldn’t work though lol because you were twins and your sibling was a boy so the blood test could only tell you that at least one of you is a boy but the second could be boy or girl
It should work fine for singletons unless the baby has something like swyer syndrome

Well in your case, the blood test wouldn’t work though lol because you were twins and your sibling was a boy so the blood test could only tell you that at least one of you is a boy but the second could be boy or girl

Yes, obviosuly. This was also almost 35 years ago, it’s good to keep that in mind. I don’t think blood tests were even used at that time to determine gender, at least not where we lived.
When I was pregnant with my twins the blood test only told us at least one of the babies was a boy, but for the gender of the second baby we had to rely on an ultrasound, obviously.

I think it will be a handsome boy.