Beyond Mama and Daddy - Names for Non-Binary Parent

I’m pregnant with my first, due in [name_u]March[/name_u], and encountering an unexpected and rather daunting naming challenge - what will the baby call us?

As a cis femme, I’m pretty easy to figure out: I have been referring to myself as Mama or Mommy. But when it comes to my partner, we’re coming up dry.

Baby’s other biological parent is my spouse of ten years, who is biologically intersex, identifies as non-binary, and uses they/them pronouns. They have no idea what they want to be called. As someone who was assigned male, and whose biological sex and gender identity are ignored or trampled on by most of their conservative family members, they really shy away from traditionally male parent names like Papa, Daddy, etc. Female-coded names like Mom are easier for them, but binary options still feel a little like erasure.

We have tried Nonny, because it’s similar to Mommy and riffs on “non-binary,” but it wasn’t a comfortable enough fit to put up with the need to constantly explain the term to others. That being said, if there’s a gender neutral or non-binary term that works, that would probably be the ideal outcome.

I know an easy solution would be to have the child just call my partner by their first name, but we both shy away from that because it’s something you usually see in relationships where one parent is a step-parent or is dating the bio-parent. Since in this case, we are both biological parents, I’d prefer to be on the same footing.

We could really use some suggestions. We’re open to other languages than [name_f]English[/name_f], and we’re especially interested in any gender-neutral parent names you can think of or are familiar with.

Thanks in advance for the help and ideas!

I have a friend whose non-binary and they recommend [name_f]Baba[/name_f] which is a gender neutral term the heard once online, they also recommend the simple Parent nn [name_f]Patty[/name_f]? Or just regular nn that sound like Papa and Mama (given how their both the same sound) ex: [name_f]Zaza[/name_f]

Hope this helped! And congratulations on your pregnancy!

I’ll admit this stumped me, so I Googled it and found this: 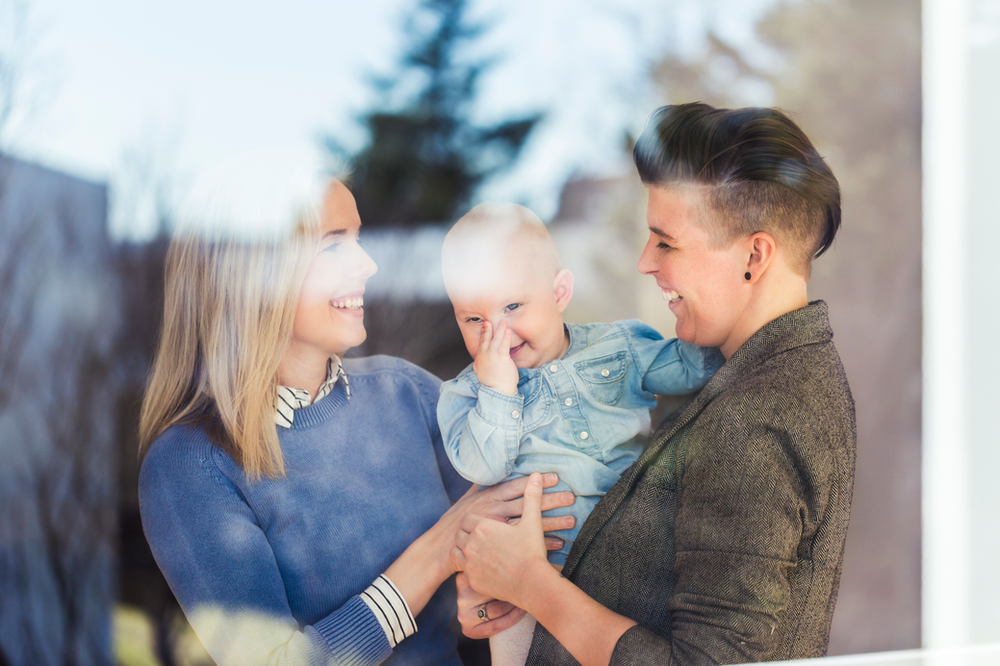 LGBTQ+ parents and intended parents can often struggle when it comes to deciding on the names that their children will address them by. Whether it's a two mom family struggling to decide on which mom will go by which name, a two dad family deciding...

I like [name_f]Baba[/name_f], sounds a bit like bottle though. What about taking your partners name and using a sound from it. For example, [name_u]Jordan[/name_u] could be [name_u]Jojo[/name_u].

@lavenderwitch, I really like [name_f]Baba[/name_f]. I agree that the [name_f]Baba[/name_f], [name_f]Zaza[/name_f], etc. options make good sense in terms of linguistic development as your child will still be able to pick up the name at around the same time as mama. It is a good place to start and then if it still doesn’t right, you can go from there.

You could use a shortened version of their name. Or have a play around with their name and create something unique. Congratulations

We call my dad [name_u]Izzy[/name_u], his nickname. Nomy is cute!

How about [name_u]Ren[/name_u] or [name_u]Renny[/name_u]? It’s the most common non-binary parent name I’ve heard. It comes from parent.

I’ve encountered non-binary parents who use [name_u]Ren[/name_u]/Renny as a gender-neutral interpretation - that might work for your partner!

I agree with previous posters, a shortened version of their name would work as well!

As someone who has no experience in this situation, I can’t really give any more suggestions than what have already been suggested. However as a parent I like the idea of baba solely because it’s as easy to say as mama/dada and I feel like every parent waits for their baby to call them by name and [name_u]Renny[/name_u] (while I think is totally usable if that’s what feels comfortable) is a little more difficult and would take longer to say.

If it helps, there is a couple similar to yourselves featured on 9 Months with [name_f]Courteney[/name_f] Cox in season 1. I believe the non-binary parent settled on [name_f]Baba[/name_f], but I’m not 100% sure.

I’m stumped on this one, the best I can come up with off the top of my head is [name_f]Mimi[/name_f], which is supposed to read feminine but seems like a gender neutral nickname to me.

Someone I follow on Instagram has been called Apa by their daughter for the last 11 years! (@lifewiththisone)

Thank you all for the suggestions. I wish I could say we’d found something, but SO still hasn’t settled on any of the options we’ve tried.

Things that were considered and rejected:
Nonny
[name_f]Baba[/name_f] - I really liked this one, especially since it’s a term of affection for elderly Japanese women / grandmothers
[name_f]Mimi[/name_f]
[name_f]Zaza[/name_f], [name_f]Zizi[/name_f], and Zozo - These are all out because we had a former best friend who was always meant to have a significant role in the birth and parenting of our child, but who unexpectedly exited our lives on really awful terms. Their name was Z@r1, nn Z, and all the Z options remind SO of them.
[name_u]Nana[/name_u]
[name_m]Parry[/name_m] (as diminutive for parent) - All they could think was [name_u]Perry[/name_u] the Platypus from [name_m]Phineas[/name_m] and Ferb, haha
Appa
Moppy - I hated this one, but they were actually considering it for a while so I didn’t want to discourage an actual option!
[name_m]Pom[/name_m]-[name_m]Pom[/name_m] - I thought this was super cute and SO thought it was ridiculous haha.
Titi - We considered this as a diminutive of their name (T3ss@), but for one thing, it sounds too much like slang words for urine and boobs. For another, Aiti (Finnish for mother) is the name the baby will be calling our girlfriend (who will be co-parenting with us as we all live together) and the sounds are similar enough that it would be confusing.

Suggestions I have waiting in the wings to discuss:
Nommy - a smoosh of non-binary and Mommy - this one is a little iffy, because my sister N@om1 goes by “[name_f]Nomi[/name_f]” with a long O, and it might be too similar.
[name_f]Maddy[/name_f] - a smoosh of Mama and Daddy - not sure if it sounds too much like a first name?
Moddy - a smoosh of Mommy and Daddy - this would be cute because SO is a software developer who creates a lot of game mods as a hobby

Also considering having SO just go by Mum or other femme parent name. Does anyone have any suggestions along this line that aren’t too similar to Mama/Mommy?

Still open to any other non-binary / gender-neutral ideas as well! We only have 2.5 months left, so I’m feeling the pressure with this as much as I am with naming the actual baby. >_>

Cennend is an old-[name_f]English[/name_f] word for “parent”, that I’ve seen mentioned in the context of non-binary parents before. It can be shortened to Cenna, Cenni or just Cenn.

I hope you find the right name!

One of the previous posts made me think of [name_f]Poppy[/name_f]. It’s a traditional dad name, but the flower and girl name give it a feminine side.