Now this too. Once again, only on nameberry. I had to blur some inappropriate stuff out but it was saying I got the viruses from… Adult sights. I don’t watch that stuff.

Also, I haven’t opened any emails besides ones from @pam (I’m writing an article for her, & I’m not accusing her of anything either, just saying that I didn’t get it from an email) nor have I downloaded anything onto my phone in almost a month. Still being careful about sketchy websites. It’s only showing up on Nameberry, like the last one, & I can’t think of anywhere else this could come from. 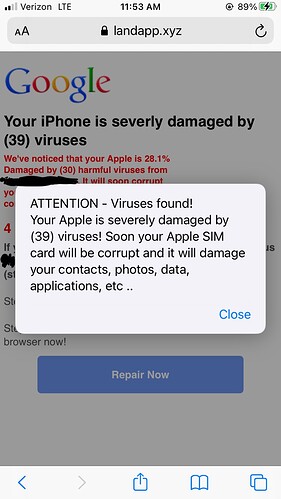 @skylerros I have already passed this URL on to be blocked, but it won’t kick in straight away. Have you considered installing an adblocker on whatever device you’re using?

Most adblockers aren’t supported on my old, cheap, junky phone.

I’m currently in mid-[name_f]Florida[/name_f]. But I live in the big island of Hawai’i part of the year as well.