Why was the name generator taken away? Particularly if the new one wasn't ready to go?

Initially we were told it was almost ready. Now it’s been quite a while. I don’t understand why such a useful feature would be deprecated, it was really incredible and, when one could use existing favorites to generate similar names, without anything quite like it anywhere else on the web. Did it cost money to keep the thing running? … I can’t imagine that’s the case.

So let me put forth a request that the name generator returns. Those who feel the same way should say so.

O Nameberry! Restore us to the nomenclative glories we once knew!

I don’t know why Nameberry took theirs down, but Magic Baby Names has a very similar feature.

I think this is a better link for the tool.

Hey thanks, that is great. Quite similar indeed, except that it generates from a single input instead of a list (but is easier to reconfigure than nameberry’s generator was). You even set it to an example name I myself would have used. [name_f]Isolde[/name_f]! Thanks.

You can add multiple names as inspiration? 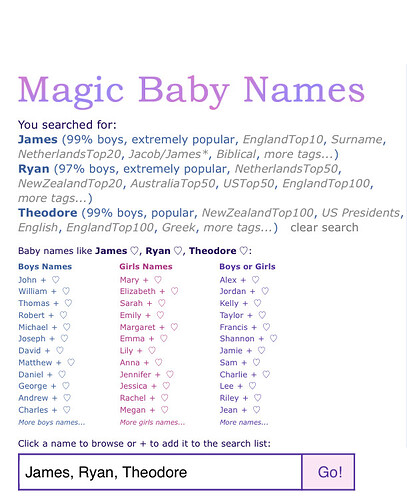 lol even better. Thank you.

From a product standpoint, it could have been any number of reasons. Maybe there were updates to the site’s architecture that we aren’t privy to, and those made it clunky/impossible for the name generator to run.

I miss it too, but there’s so much that goes on behind the scenes with product development. Sometimes you can think you’re super close to launch and out of the blue, something pops up and puts you back days or months even.