The All About Nameberry Quick Question Thread

thanks! oh, also, is there anyway to change your email address? i used a throwaway email address and i’m scared something might happen to my account.

You can PM me the new address and I can ask [name_m]Hugh[/name_m] to switch them over (will be at least a few days before he gets to it).

This has been happening for a few months by now but I’ve never actually asked about this. When typing a new post you know how you can lower and raise the section so you can see whatever thread you’re in while typing? That went away for me a few months ago and now typing takes up the whole entire screen instead of half. Was wondering if this was part of the update that was happening at the time or was some kind of error?

I have a sort-of similar problem. It doesn’t take up the whole screen unless I want it to, but it used to stay at one level for replying and one level for making a post, but now whatever level I had it at for posting stays for replying, it never used to do that

not sure if this has been asked before, but it probably has.
i was just wondering, why do pm’s have a limit of 25 replies?

Because with so many younger users and a shared-interest community, we see no benefit — and plenty of potential problems — in having long discussions going on out of sight.

how do you become a moderator? ( i’m not looking to become one anytime soon, i’m just curious!)

In the badges section, why are some colored with a green check mark and some are gray with a check mark? There’s probably really obvious answer that I’m missing here, sorry!

There’s a bronze/silver/gold level system for badges. The grey ones are the silver ones, the other two are varying shades of yellow/orange.

I don’t think this the right thread for my question but it is a question and it does relate to Nameberry.

I was scrolling through the Popular Names lists and towards the end, they start to not display correctly?
The majority appear like Bosnia & Herzegovina, but the last three lists (Chile, Croatia and Ukraine) appear a little more randomly. 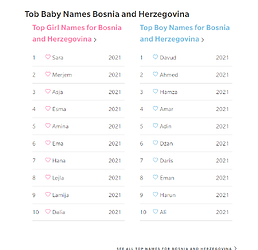 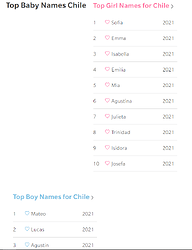 I’m just wondering if this is a me issue or a formatting issue on Nameberry?

I have sent a note about both of these